Despite some pretty poor weather the first boat match of the year was fished at Loch Etive on Sunday. The event winner was decided by adding the joint scores of each anglers longest spur dog and longest thornback together.

On that basis the result was as follows:

Biggest spur was a fish of 88cm for Gordon.
Biggest Thornback was 64cm for Camie.

The next club boat event will be fished in conjunction with the RNLI species hunt which is on Sunday 30th March at Loch Etive. This event was not published in the original club fixture list but because its a quiet time of year and being run for a good cause I think its appropriate to support it.

Points at this event will be awarded for number of species caught. 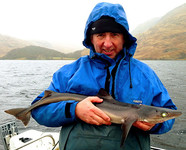