Willie, Stuart and co headed to Norway for a bit off shore fishing. They caught cracking whitting, halibut, torsk, plaice, and dabs and Sandy had caught a nice pollock about 10 1/2 lbs. Kevin Lewis caught a nice wolfish and a small lanter shark.

Tony, Iain and John headed down to Port Patrick to meet up with Matt and his nephew for a day fishing aboard optimus. We had planed for fishing for huss and spurs but arriving at the mark there was a scallop boat dredging. Plan b go spinning for in shore fish till the boat moves off the mark.

We caught some small Pollack and coalfish.

The scallop boat stayed there all day so we headed to another mark which Dominic knew but all we had were loads off doggies and two small bull huss.

Shane and John headed down to Port Patrick for a spot of shore fishing. They had some small Flounders and Plaice for three hours fishing.

That changed once the Sun went down and night fell the haddock, doggies and whitting started to show. Catching 3 at a time whitting. On a 3 hook trace we had a haddock, whitting and codling. The fishing was non stop for the next couple of hours. 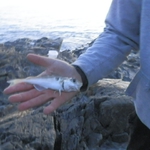 Nico sent me a picture of a flounder he had caught as he and Stevie were fishing at port logan shore.

Iain and Tony went for a wee session at Port Patrick. The water was clear with a strong off shore wind. They had a few Flounders and some nice plaice

Shane and John had session at Troon and Prestwick shore as they had some bait leftover from the club match. Fishing troon first they had coddling, and wrasse

They finished off the last few hours at Prestwick. Shane landed 2 nice Flounders to finish off the night

Hitting the beaches at the weekend

Shane and John headed to the beach last night. Arriving at the mark the surf looked bang on. In the first couple of hours they had landed a few bass and Flounders till the weed made it unfishable.

New plan was to head to another mark and hopefully there will not be as much weed about. This paid off for John as he landed a nice bass weighing at 4lbs 5ozs and a few more flounders to finish off the night. All fish were returned

Tony and Iain had a wee session at Troon. They had a few coddling, Pollack and wrasse for their efforts.

John and Shane headed out for another species hunt at the weekend. They had pleanty of fish with dog fish and whitting to keep them busy. Shane had the best fish of the session land his first ever bull huss at a cracking 10lbs 14ozs and a smooth hound at 7lbs 12ozs. Well done Shane 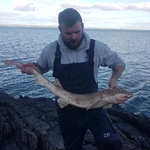 Iain, Tony and Dominic head to the Shetlands on their annual trip. They were there for 4 day's fishing and between them they landed some nice fish, some pbs were broken and a new club record for Tony. Tony land a nice 39lb ling with Iain landing a cod of 19lbs.