Hi guys
We had the first shore match on Sunday at Port Patrick. I did not attend this match as I had a little mishap while out fishing the week before.
Iain run the match on my behalf and has sent the results on the day.
Results are as follows - 1st Iain Grant with four fish for 162pts
2nd Tony MaGorian with 1 fish for 35pts
Next match will be on the 8th June at dunure.

The shore match on tues was pretty hard going. The sea had a perfect surf running. Fresh lug, rag and peeler crab was sent outwards. We fished the match with nothing happening for three hours.

The match was up for grabs with anyone having a chance to win. With five minutes to go Shane had a bite which resulted in a slack liner but sadly no fish attached at the end.

Iain then got a few knocks and struck in to the fish ...match won. Well done mate. 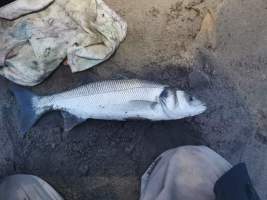 Shore Match on the 19th June

This match was fished over six hours. First into a fish was Tony landing a nice bass then new member Jamie with a small plaice. Shane and myself opted to fish a different mark as we all could not fish the same set off rocks. Keeping in touch with Iain nothing had changed in the next 5 hours. We were putting out fresh peeler crab, rag and lug worm still nothing around the fish did not want to play ball.

in the last hour of the match it went mental. The fry were being chased by something 80 yards out from us.Then Shane got a slack liner and struck in to the fish but it snapped his line. Second one he got to the edge of the rocks a nice thornie which spat the hook out as it touched the rock.

Then I was into a nice fish next and landed a nice thornie which weighed in at 7lbs 14ozs. Next was a smoothie of 5lbs 8ozs. Iain also had a smoothie of  nearly 5lbs. It's always the way the fish start to appear when the match is about to finish,  that's fishing for you.

Next match is on the 3rd July

Shore Match on the 3rd July

When arriving at our venue the rain in the morning made it unsafe to fish the mark safely. We decided to head to our backup venue. This mark seems to fish better on the ebb tide. There were no smoothies around this time but more thornies were.

Iain was first into a fish which nearly pulled his rod rest and rod into the water. While fighting the fish Iain lost it and noticed his hook was missing. Iain had three thornies from 4lbs - 5lbs. Tony landing one for myself around 8lbs. Iain landed the best one at 8lbs 5ozs for Tony. As Iain slipped the net under the fish it spat the hook out. The same thing happened to Shane last time only thing different was I had my landing net this time to save Tony's fish.

next match on the 6th July

We fished the ballast bank in Troon for 3 hours in this match. There were some small wrasse and small Pollack about.

Iain landed a nice tompot blenny for the species hunt.

next match is on the 3rd August.

The sea was a bit rough when we arrived at the usual car park. The wind direction had changed to a southwest wind which helped.

4thT MaGorian with 1fish for 27pts

Next match is on the 24th Oct

The match was fished at riverside in Dundee. From the first cast fish were being caught doubles and trebles at a time. This continued till high tide at six o'clock. As the tide started going out the weed became a bit off a problem and made the last hour unfishable.  It was a good match with plenty of fish being caught.

Next match is on the 2nd Nov

This match was fished at the Newton shore. Fishing was pretty poor with only small whitting attacking your bait and tangling your snoods.

Some of the guys managed to catch some sized fish well done guys.

Next match is on the 16th Nov

Arriving at the venue there was a great surf running but as the wind changed direction it brought in a lot of weed into play so it made it a hard one to fish. The weed became that bad you had to haul it onto the beach by hand as there was to much on the line which made the last 15 minutes unfishable.

Next match is on the 27th Nov.