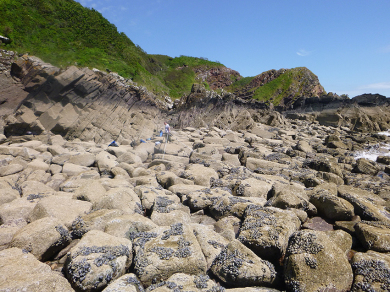 The 4th Shore match in the club shore calendar was fished near the Gatehouse of Fleet in the Solway with fishing times of 3pm till 10pm.

Conditions on arrival looked ideal for the fishing and topping up the tan! With clear blue skies and a roasting sun! With nice water movements giving an nice rolling swell.

Sandy and myself opted to fish away from the group and headed further south to a different mark for the option of maybe trying for a tope later in the deeper water. We started off with no activity on our rods for at least 2/3 hours. Scanning over the rest of the group and seeing the occasional fish being brought in, thinking did we make the right choice....!? When we were washed off our stances we retreated back up the rocks to fish from the higher ledges and in doing so the bites started fairly frequently for myself and Sandy with pretty much a fish a cast. Just Smoothhound for us and no other species. I had a cracking bite which resulted in a Smoothie which at a guestimate would have put it around the 7/8lb mark which I was trying to keelhaul up the side of the rocks, resulting in it parting from the hook and landing in a crevace next to the water - we both tried down for it to no avail as it managed to flip itself over back into the sea.

Fishing was fairly constant for the rest of the flood for us and when the slack tide came it pretty much switched the bites off too! - Match finished at 10pm and we headed back to see how the others had got on. 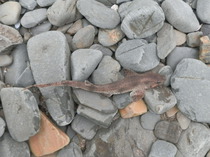 The 3rd match in the club shore calendar was fished near the Gatehouse of Fleet with fishing times of 4pm till 10pm.

Conditions on the day were winds SW 15-20mph and the water was like chocolate! So expectations were high for bass on the flood and smoothies when the tide deepened...

Fishing for the first couple of hours was slow to say the least! I was fishing along from Sandy, who managed the first fish, a dogfish and this seemed to be the only action of the moment - as the tide flooded and our stances became lesser and lesser I opted to move along to near Sandy and upon doing so, got my first bite of the day! - Another dogfish. Sandy moved further along the shore and I opted to fish my mark as long as I could as I was getting a bit of interest on my baits, I managed another 2 dogfish here and another further along, whilst Sandy in his new location had managed to wangle out another dogfish, along with a common eel and a flounder.

9 members fished the event with 5 of us managing to catch.

I think that the lack of fish may have been down to the large number of pack tope that have been noted in the Cree Estuary and this may have put the fish off on a usually banker of a mark for flatfish!

Longest fish I Grant with 27cms. 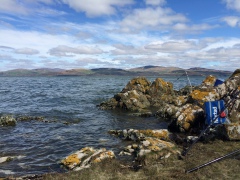 The second match in the club shore league calendar was fished at Innerwell on the Cree Estuary, fishing a dropping tide from 12.30pm till 19.30pm. 10 club members attended the match.

Fishing was a little slow to start, but once we were able to get baits on the sand in front of the rocks the bites started to come more frequently. Nico, Shane, John & Robert moved up, along from me, with Nico managing out on one of the points. It wasn't long before he was into fish, with a nice double shot of small flounder.

I managed a nice flounder at 45cms shortly after. Not long after that, Nico lifted in a nice Thornback ray, which weighed was 7.5lb and again shortly after that I pulled in a ray myself. It was a huge tide over the weekend and as such the bay emptied of water fairly rapidly, but I must have had my ray in 6inches of water or less!